Donna Peele is a former model and actress who is more popular for being Charlie Sheen's first wife or shall we say the first woman to say "I Do " to the 52-year-old actor. Charlie and Donna Peele met for the first time when they worked together on a cigarette commercial.

Soon after they met in the cigarette commercial, the chemistry of the two sparked and they sealed their bond only after knowing each other for six weeks.

But it was not an easy wedding since Sheen was facing a trial for madam Heidi Fleiss’ prostitution. However, later Donna Peele and Charlie Sheen got married after all the hardship on September 3, 1995.

At the time of their wedding, Charlie Sheen said:

She’s an angel sent from heaven to take me through the rest of my journey.

But, the box of love spilled over as they got divorced by November 19, 1996, and regarding the divorce, he stated:

I couldn’t breathe, I had to come up for air. You buy a car, it breaks down, what are you gonna do?

The reason for their divorce is not disclosed to date.

Who is Donna Peele dating?

The actress who is now 48 was once one of the most talked-about Hollywood actresses who tied her knot with Charlie Sheen. But along with her split, she disappeared from the razzle-dazzle of Hollywood.

Currently, no reports on Donna's personal life have flashed on the media, neither the information on her boyfriend or affairs after her divorce is out.

After his separation from Donna, Charlie got married two times. Among those two marriages, the most talked about marriage which was also tagged with one of the most troubled Hollywood mismatches was with actress Denise Richards. 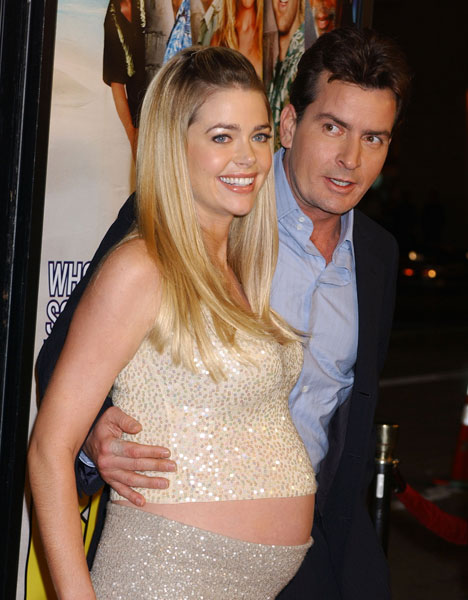 Charlie Sheen and second wife Denise Richards with a baby inside

They were together for short three years and separated with a divorce action filed in an LA court in 2011. According to The National Enquirer, Charlie's ‘psychotic break’ was the reason for her separation from Sheen.

Also, Charlie is not free from past affairs, as he was engaged to Kelly Preston and even shared a daughter Cassandra Jade Estevez born on December 12, 1984. However, in January 1990, he accidentally shot Kelly in her arm and the engagement was called off.

Charlie Sheen revealed HIV positive in an exclusive interview with Matt Lauer after paying the blackmailer $1million dollar because he did not want to pay any more money. After Charlie knew about his bad health condition he was out of the spotlight in the year 2015.

Even though Charlie Sheen the troubled actor has five children, and three ex-wives Donna Peele, Denise Richards, and Brooke Mueller none of them are HIV-positive.

If Americans didn't stigmatize those with #HIV, people like @charliesheen wouldn't be subjected to paying folks to keep quiet. #CharlieSheen

Also, check out the video of Charlie  roster

With all those ups and downs, Charlie is still surviving and seems to be happy with his life, and is still entertaining us. Way to go Charli, whatever be the situation we know you will come out as strong as ever.