White rapper Eminem AKA The real Slim Shady's daughter Hailie or Whitney Scott Mathers has turned 21. She looks sizzling hot in her recent Instagram posts. You will be surprised to see how much has she grown.

We will get there soon but first, let's give you some intro about  Hailie Jade Scott Mathers. Well, now she is known by Hailie Scott in Instagram. You all might know that Hailie is the daughter of Kimberly Scott and Marshall Mathers a.k.a. Eminem. She is fully grown and has turned 21 recently on 25th December. 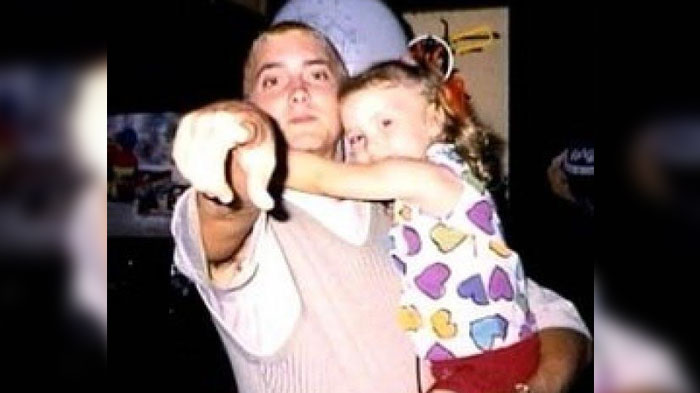 Let's explore her life from some of her Instagram images. The baby girl who Eminem never misses to mention on his songs is a well-grown adult and has both Eminem's and Kim's looks.

Mentioned earlier, Hailie turned 21 on Christmas. She was off the spotlight after passing comments on Taylor Swift but not anymore as the paparazzi followed her and has finally discovered her.

The baby girl as beautiful as Em explains on his tracks. Thank's to her daddy Eminem who has already made her an unforgettable name in the Hollywood. Songs like Hailie's song,  Mockingbird, When You are Gone and Cleaning up my closest where he says about how beautiful his daughters are to his fans, she has grown to be more beautiful than anyone else. Wait for the sweet part,  Hailie also has a boyfriend, she is involved in a romantic relationship with a guy. If you are those who thought to date her, then there is no chance at all. She came out with a boyfriend on her side.

Check out the Instagram post from Hailie Scott with her boyfriend and school mate. Captioned as Couldn't have asked for a better 21st birthday celebration (or a better guy to have by my side)

She looks quite amazing, right? Well, you are not the only one who said that there are other fans who have mentioned the same thing. Check out the tweets from fans

Have y'all seen Eminems daughter? Oh my goooodddd

Eminems daughter grew up to be one fine woman lol

In case, you don't believe that she is the same girl that, her father Eminem mentioned in his famous hits, then here's an Instagram post from this lovely girl as we can remember her.

Also, don't miss the video from Eminem which is dedicated to his little cute baby girl Hailie

Now, we hope that confusion regarding Hailey being a kid is cleared from your brains. The famous baby that is often brought in Eminem's hits is now a fully grown woman and we are not sure if Hailey will take acting or singing as her carer or she has some different plans but we like to wish her a Happy belated birthday and best of luck for her future as well.