FamousStardom https://famousstardom.com/
Home Gossip How long has Helen Mirren been married? Know about her relationship and married life

How long has Helen Mirren been married? Know about her relationship and married life As people say 'Age is just a number', this proverb perfectly matches Helen Mirren. Helen even at the age of 71 is such a gorgeous beauty whose charm can make many men crazy. This English actor Helen Mirren has been giving her thrilling and mesmerising performances for the English movie industry since the year 1966 and is still active. Her professional career is a known one, we doubt anyone who says they don’t know or like Helen Mirren.  But talking about her personal life she made a great confession and admitted many truths related to her marriage life. She told that her relationship with her husband wasn’t filled with love and her married life wasn’t as she expected it to be.

Helen Mirren previously talked about how her love life wasn’t filled with romance. She mentioned her married life having a lack of romance. Helen revealed many surprising secrets to her long relationship. Helen Mirren and Taylor Hackford have been together since 1986. This couple got married on 31 December 1997 at the Ardersier Parish Church near Inverness in the Scottish Highlands. Before getting married to Taylor, Helen lived with actor Liam Neeson during the early 1980s. Helen Mirren and Taylor Hackford met on the set of White Nights and became good friends. Even after the movie they had good terms which finally led them to marriage. Helen marriage to Taylor was her first whereas Taylor was previously married twice. Since the time this couple has become husband and wife they haven’t been separated even once. A few years back Helen confessed that the only reason behind her marriage was for economic reasons. As the reason was money we can guess that even though this couple didn’t frankly share about their bad relationship or show people getting separated they weren’t having quite a good relationship. She also told that they don’t really prefer sending Valentine cards to each other or even often forget to mark birthdays with a present.

"Taylor and I aren’t remotely romantic with each other. And actually, we appreciate the lack of romance in the other person. I'd be completely horrified if Taylor gave me Valentine's card! That's not our sort of relationship at all – we would pour cold water on that sort of thing." 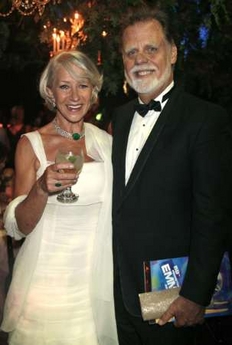 As this married duo didn’t have a romantic love relationship even being a husband and wife may be this is the main reason they don’t have any children.  Lack of communication was also the reason given by Helen for the sort of relationship they have as she doesn't really talk to Taylor a lot.