google-site-verification=4bnk62g9xhmen0Se9pbgReGBNe8HpbDkFVsASL89gTk Does Dunkirk and Cloud Atlas James D'Arcy have a wife? Is he still Single or Married?

FamousStardom https://famousstardom.com/
Home Gossip Is James D'Arcy still Single or Married? Who is he Currently Dating? Know about his Girlfriend

Is James D'Arcy still Single or Married? Who is he Currently Dating? Know about his Girlfriend It's not that astonishing when we come across a media personality who doesn't want to expose his private life. Although we often forget that they have a private life of their own, popular personalities take their personal details very seriously.

James D'Arcy, it turns out, is no different from other celebrities. The Dunkirk and Cloud Atlas actor, who has appeared alongside Mark Rylance in Dunkirk, multimillionaire Hollywood legend Tom Hanks in the latter and also features in the Marvel Entertainment and ABC series Agent Carter, has not been forthcoming when it comes to his private life, although he is not that secretive.

Even during his recent interview, unlike other media personalities, D'Arcy was not denying the fact that he was no more single. However, D'Arcy said that he didn't want to spoil his romantic life by exposing out to the public. So let us delve into the private life of D'Arcy's today.

James D’Arcy’s Relationship that he kept secret for long

Agent Carter star James has always kept his personal life behind the curtains. Similarly, he does not easily disclose his affair. However, in an interview with Dailymail in December 2012, James D’Arcy was asked some questions associated with his off-screen life. 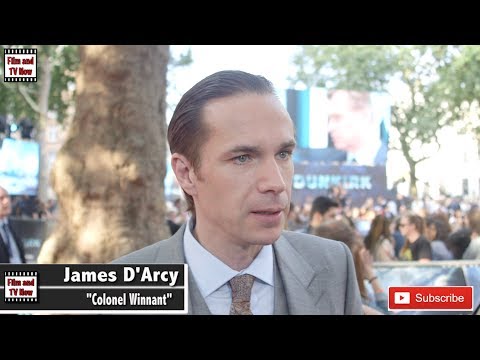 When D'Arcy was asked about his life's secret, he said:  -

“Oh yes. But if I told you, they wouldn’t be secrets. Same applies to my love life.”

You know what was the most interesting part of the interview?? James revealed the secret about his girlfriend and again was asked a bit more personal query regarding his first kiss.

When James was asked about his first kiss, he gave an amazing reply for that. Let's see what he had to say.

In his own words:

“Let’s just say the first one, because it opened up a new world. Her name was Louise Jerome, we were both 12 years old. I’m rather mortified that my mum is going to read this.”

Previously, James revealed that he prefers enjoying a love life that is to be kept a secret. But, what now? Can we say he is not a man of his words?

Lucy Punch and James were once a lovely couple who dated for not less than six years. Lucy and her former boyfriend James started being in a relationship from the year 2002 till 2007. The romance between them first started when the couple met while filming Come Together (2002).

But wait. That's not all. James, who is also recognized for his portrayal of Tom Pullings in Master and Commander, has been accused of being gay.

D'Arcy was once rumored of being day? Let's find the reality behind the rumor

Despite knowing his past affairs with Lucy Punch, there came a time when James was rumored to be gay. The reason, it turned out, was because he had not been spotted with anyone for quite a while. However, later, the rumor turned out to be false information.

James chatting with Harry Styles, great photo by Yann Fossurier for France 3 North Pas-de-Calais. They have great coverage of the premiere last night, more evenly-balanced perspective of the cast. #jamesdarcy ??

After that, James was said to have become close to Hayley Atwell and the two were even rumored to be dating each other. They were even spotted sharing intimate moments with each other while in an event in San Diego.

However, it did not seem to have worked out for James. Currently, D'Arcy is single. We wish James all the best for the future and hope that he is third-time lucky.