FamousStardom https://famousstardom.com/
Home Gossip Is Monica Crowley married to Alan Colmes? Is she still dating Bill Siegel? Or is she single? TV personalities do seem to have high tendencies of popping up on news feeds and gossip platforms. Well, giving out the worldwide news and not being the topic for one doesn't seem all that improbable, does it?

Regular columnist Monica Crowley is currently on the buzz. Her relationship status is under scrutiny, it seems. This alluring beauty has been not-so-explicit about her personal affairs. But we certainly cannot deny the fact that she hasn't been all that secretive like Fox News anchor Kelly Evans.

Regarding her personal news, Monica has been having an affair with her boyfriend, Bill Siegel, for quite some time now. They have made several public appearances as a couple. Most recently, they were seen together attending a cocktail party. Doubles Anne Hearst and Jay McInerney and George Farias gave their annual holiday cocktail reception for 350 guests last December; Siegel and Crowley were seen hand in hand at the party, enjoying each other’s company.

This hottie has had her share of controversy in her professional life as well.

In 1999, she was accused of plagiarism on one of her Wall Street Journal article published under her byline, which appeared to mirror an article written by British writer Paul Johnson on the same topic. The article, about Nixon, contained several exact replicas of statements from Johnson's Commentary Magazine article. The biggest giveaway was the use of Johnson's British phrases by the American writer Monica. Finding the allegations to be true, The Wall Street Journal never again ran Crowley's alleged work.

She is also a member of the Council on Foreign Relations. Holding a Ph.D. in International Relations from Columbia University in 2000  probably is the reason behind this accomplishment. She holds a B.A. in Political Science from Colgate University.

So who is Alan Colmes? 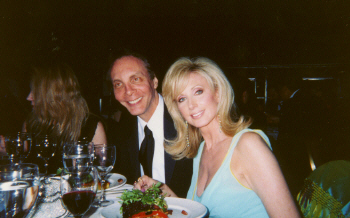 Colmes is Monica’s brother-in-law. Colmes is the husband of Dr. Jocelyn Elise Crowley, Monica’s sister. Jocelyn is a professor of public policy at Rutgers University. Jocelyn and Alan have been married for a long time.

So all does seem well with all of the aforementioned Fox family members. And we will be sure to keep all the fans and followers updated on any news of their respective breakup and divorce or even marriage.

Born on September 19, 1968, Monica Crowley is popularly known for her appearances on Fox News. She is also a conservative columnist, political commentator, talk radio personality, and author. She is currently the online opinion editor for The Washington Times and a regular columnist.

Alan Samuel Colmes was born on 24 September 1950. He is an American radio and television host, liberal political commentator for the Fox News Channel, and blogger.