Justin Chambers, an American actor and former fashion model who is outspoken about his character, Alex, romancing the protagonist, Meredith, in Grey's Anatomy,  is living a happy married life with his beloved wife Keisha Chambers. Keisha Chambers is a model booker by profession and she is a mother to five adorable children along with her husband who has over 1.8 million fan followers on his Instagram account as of March 2019.

Let's get inside Justin Chambers' personal life including his married life with his wife Keisha Chambers. Also, get to know about their relationship, affairs, children, and past relationships.

Let's get it from the beginning! The 48-year-old Grey's Anatomy star Justin Chambers first met Keisha while working as a model for Calvin Klein Ad Company where Keisha had been working as the model agency booker in 1992. Soon after their first encounter, both fell for each other and started dating since then.

After a year of dating, the couple decided to take their relationship to the next level. As a result, the couple tied the knot in 1993. Well, the wedding ceremony was reported to be held secretly. 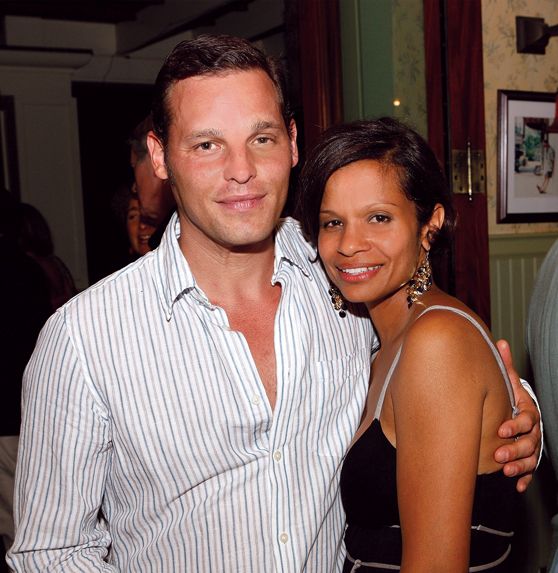 These two lovebirds are enjoying a happy marital relationship. However, they also faced some difficulties in their relationship in the past. Talking about his married life, Justin once said in an interview:

Every relationship has its ups and downs, but I'm glad I get to go through the ups and downs with her. I just feel really fortunate to have found someone who will be my partner on this journey.

Well, the beautiful couple is often captured together enjoying parties together. Here's a picture of them back from 28 September 2013 when they attended the Grey's Anatomy 200th Episode Celebration at The Colony in Los Angeles, California. Check it out. We wish the pair all the very best for their future and hope they never have to go through a divorce. Also, their family members include their adorable two rescue dogs and their adopted beagle (a breed of a dog). In an interview with Good Housekeeping, when asked if they are planning to have more kids, Justin stated:

No, no, no. We just got two rescue dogs. Of course, we got two, and not one. I guess we can't do anything in moderation.

The family of husband and wife with their five children is leading a healthy familial relationship. Probably, curious about Justin Chambers' relationship in the past, right? Here we go:

ALSO SEE: Camilla Luddington announced her pregnancy with her Boyfriend, Know about her Relationship

Justin Chambers' Past Affairs and Relationships

The handsome hunk with a height of 5 feet 9 inches probably may have dated many girls in the past, however, the case contradicts Justin Chambers' case.

YOU MAY BE INTERESTED: Grey's Anatomy's Camilla Luddington Gives Birth to a Baby Girl with her boyfriend Matt Alan

Even though Justin reportedly had many on-screen matches, but his real-life matchup couldn't be perfect more than his relationship with his wife, Keisha Chambers. No reports of past affairs have ever included in the account of Justin.