Do you know who is Ottavia Busia? She is an MMA fighter. She is famous for being the wife of famous American chef, author, and television personality Anthony Michael Bourdain, with whom she separated last year. She ended her 9-year-long relationship with him in 2016. Before we move to her married life with Anthony, know something about Ottavia.

Want to know more about her married life and divorce with Anthony, and Anthony's previous marriage? Stay with us.

Ottavia Busia, an MMA fighter met her husband Anthony Bourdain in 2007 and started dating him. After dating for a few months, these two decided to tie a knot and got married on April 20, 2007. After a few months of their marriage, they gave birth to a daughter in 2007. Later, they named their daughter Ariane.

After Ottavia got married to her husband Anthony Bourdain, she made her appearance in several episodes of No Reservations, an American journey, and a food show which aired on the Travel Channel and also on the Discovery Travel & Living. The show was hosted by her husband Anthony. Ottavia's most notable travels with No Reservations were in Sardinia, Tuscany, Rome, Rio de Janerio, and Naples.

The news of their split was first broke when a source revealed to PageSix that the couple has been separated for a while and soon after, Ottavia confirmed the news.

Anthony speaks out about his split with wife Ottavia to People Magazine. Anthony stated that he had a very busy schedule during his show Parts Unknown. He has to travel 250 days out of a year for his show which increased the gap between them. He also said that when he was at home, he mostly gave his time to his daughter Ariane rather than his wife Ottavia.

Video: Ottavia talks about her passion for MMA

Before Anthony got married to Ottavia he was married to his first wife Nancy Putkoski, whom he divorced in 2005. If you are wondering to know more about his previous marriage, we have it for you.

Anthony Bourdain was first married to Nancy Putkoski. We only know that Nancy is an American with whom Anthony developed a relationship in 1985. They got married in 1985 and remained in a married relationship for about 20 years. 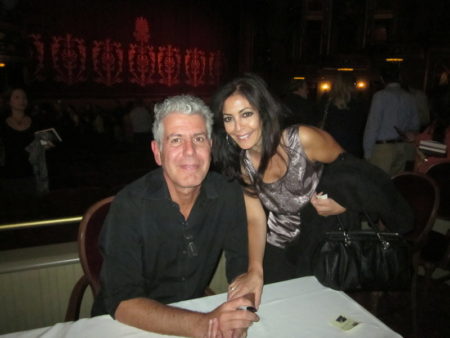 They didn't have any children during their 20 years long married relationship. In 2005, he ended his relationship with Nancy after he legally divorced her.

What do you think of Ottavia and Anthony? Please, leave your opinions in the comment box below.