Phil Mickelson Married Amy Mickelson in 1996. Know about their Married life and children Amy Mickelson is the gorgeous wife of professional golfer, Phil Mickelson. This adorable pair has been together as a husband and wife since 1996. Despite spending more than 20, amazing years with one another, Phil’s relationship with his wife is going great. There is no rumor of divorce between them.

Let's find out more about their relationship here in FamousStardom.

Phil met his beautiful wife in 1992 at the Arizona State University. During that time Amy was a cheerleader for the Phoenix Suns and was a junior while Phil had just graduated. Later this pair started dating and fell in love.

The couple is parents of three children together, two sons and a daughter.

Amy and Phil have three amazing kids together. Amy gave birth to Phil’s eldest daughter, Amanda, just after Phil won runner-up in the U.S. Open to Payne Stewart in 1999. During that time, Amy waited so badly so that her husband would win the competition. She said, “That was a different time. Our world was centered around golf. He was very determined.” Image: Phil Mickelson and Amy Mickelson with their kids

Amy gave birth to her second daughter, Sophia, in 2001. Eventually, Evan, the Mickelson’s third child was born in 2003. Evan’s birth was really a tough time to the Mickelson’s as the delivery process was life-threatening to both Amy and the baby.

During an interview with ESPN, Phil said,

I didn’t really get into it too much, but Amy had a very dangerous delivery with the birth of Evan. He had a very difficult delivery, too.

He didn’t breathe for seven minutes and had the emergency nurses not been there with the equipment ready, he might have had some severe brain damage or other circumstances. Image: Phil Mickelson and Amy Mickelson with their children

Amy had ruptured one of her uterus’s artery which stopped the breathing of Evan. Luckily, both of them survived. In 2003, Phil let his fans know that all of his children and his wife is in sound health. He said,

It has already been more than 20 years since Mickelson’s marriage. Even today, their relationship is going well. Phil is really close to his wife and kids. All of his kids are growing up in much love and care from both their parents. Phil and Amy are totally an inspiration. 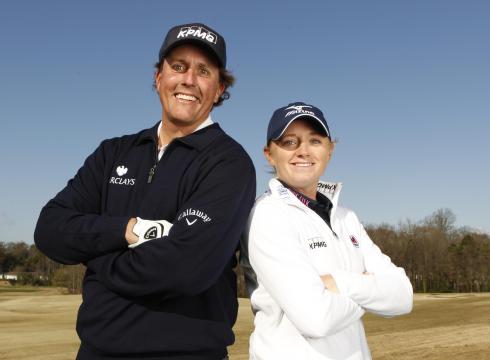 What do you guys think about them? Please leave a comment below.