Ron Fisico and Trish Stratus: married in 2006, is blessed with a son Maximus Trish Stratus is, of course, every boy’s crush and every girl’s inspiration while growing up in the 90’s.  Stratus is a retired WWE diva and we all loved seeing her on our TV screen. Stratus retired from professional wrestling on September 17, 2006, after winning her record-setting seventh WWE Women’s Championship.

We all know Trish professionally, now let’s turn our head towards her personal life. Trish is married to Ron Fisico. The couple exchanged their vows on September 30, 2006, and the guest list included several WWE Divas. Their wedding was also featured on a cover of Today’s Bride magazine. Unfortunately, the couple didn’t get a chance to go to their honeymoon as Trish was called to be a part of Armed & Famous. Instead of going on her honeymoon she went to film the show.

Trish and Ron were high school sweethearts and were boyfriend and girlfriend for fourteen years before tying the knot. About her husband Ron, he is a body builder by profession and is mainly known as the husband of Trish. 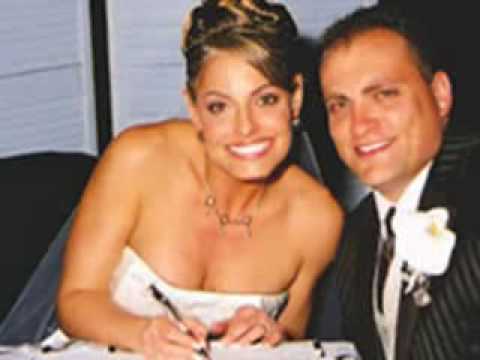 Caption: Trish and her husband Ron during their wedding.

The best thing to hold onto in life is each other, and this couple has done the same. They have been together for ten years now and if we include the time they spent together before their marriage it has been twenty-four years. It is indeed a milestone in a relationship to be together for such a long time. Even after so many years, the couple is still going strong and their love for each other is just growing stronger.

Well, it looks like Trish and Ron is a match made in heaven and is perfect for each other. They are currently living in Canada and both are a fitness trainer. Trish is teaching yoga and Ron is a bodybuilder and instructor. The pair is blessed with a son who was born on September 30, 2013. She had announced her pregnancy at the WWE Hall of Fame ceremony. Their son is named Maximus. Can you guess who they named their son’s godmother? It’s none other than the former WWE Diva Amy Dumas a.k.a Lita. Even though Trish and Lita were competitive in the ring, but outside the ring, they are best friends.

Trish on October 2016 announced via Twitter that she and her husband Ron are expecting a second child. And this time it is a baby girl. Lilian Garcia former WWE ring announcer told in her podcast that Trish is due to deliver her second child in early 2017. The couple must be very excited to welcome their newborn.

We would like to congratulate the couple and hope for their newborn’s healthy life.

What do you think about their relationship? Please leave your opinion in the comment box below.