google-site-verification=4bnk62g9xhmen0Se9pbgReGBNe8HpbDkFVsASL89gTk Sharna Burgess and her Boyfriend Bonner Bolton are dating, Not In Relationship Officially

Sharna Burgess and her Boyfriend Bonner Bolton are dating, Not In Relationship Officially Sharna Burgess and Bonner Bolton were seen in a famous dance reality show Dancing With the Stars. In the show, they seem to have great chemistry and we can see some of them giving a stemming performance.

Even though, the reports tell that Sharna Burgess and Bonner Bolton are dating each other, this duo has not confirmed anything so far. Before you assume anything, let's take some time to look at the facts about this two.

Bold and beautiful Sharna Burgess is recently seen with Bonner Bolton in dancing with the stars. And this is not the end of the story, in the show, they show a great chemistry, which gave air to the rumors that reported that Shara and Bonner are dating each other.

Before we say anything about this alliged boyfriend-girlfriend buo, check out the video of these two to get some hint about their relationship

Now, what do you have to say about Sharna Burgess and Bonner Bolton? If you guessed that they are in a relationship then you are wrong as they have made many statements about their relationship which is totally in terms of friendship.

It's been one heck of a week for @bonner_bolton and I, to be honest... kinda stressful. However, all the controversy aside I have to tell you... this cowboy can waltz!!! He tells me it's because it reminds him of the Texas two step... so this dance is inspired by exactly that and the culture surrounding it. He's worked his butt off and is on track to kill it tomorrow. Get ready for it loverz

Let's see what they have to say about each other in this video by people.com

Mentioned earlier, they are not in a relationship if you don't believe us then let's see what she had to say about her dancing partner.

“We’re not together,” “We obviously have great chemistry, we love working together and Bonner is an incredibly good-looking guy. I want to keep supporting him and working hard every week in the competition!”

But what made everyone think that they are in a relationship? Well, Sharna Burgess, who calls Bonner Bolton a gentleman was caught on camera while he had his hand around her waist. Check out the photo. 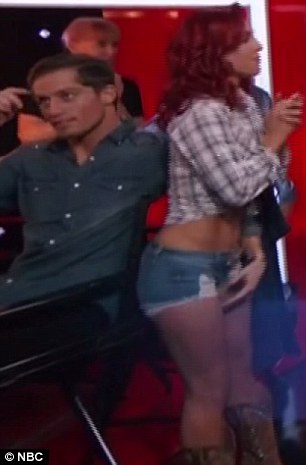 So, now you know that it's not just the chemistry between these two what made people think that they are in a relationship but this photo gave a lot of air to it. But as, Sharna has mentioned that there is nothing between them. It's was an honest mistake. We have the video of this incident too.

Don't miss the tweet from Shara Burgess where you can see Shara and Bonner's great chemesry.

We hope that the fans and followers do not make an assumption being based on a photo which is nothing but a honest mistakes.