Finding the right life partner sounds so easy, but it is not as it seems. One has to go through many ups and downs to find a perfect life partner. This applies to every single human being on earth. In fact, actress-producer Holly Hunter also faced the same situation before meeting her current husband, Gordon MacDonald.

Holly was previously married to Janusz Kaminski, and after she got out of her previous marriage, she found the one she was looking for. So, without any delay let's know more about Holly and Janusz's love story, and also about her past affairs.

Gordon MacDonald, an actor, best known for The Thin Red Line (1998), The Brave One (2007) and Brain Damage (1988) met Holly Hunter in San Jose Repertory Theatre's production By the Bog of Cats, in which she played a woman abandoned by the lover of 14 years, played by MacDonald. Holly and Gordon during an award function

Well, even if the actress knew Gordan for many years, she finally started dating him in early 2001. As per Gordan, he was the one to propose to actress Holly for a date.

Holly Hunter spoke out that she's engaged to her long-term partner Gordon MacDonald after she was spotted with a ring on her ring finger during a TV appearance. As per sources, they have been together since 2001.

Hunter at the age of 47 got pregnant for the first time with Gordan's twin babies and gave birth to twin boys in 2006. At present, she is a proud parent of two children.

Both Holly and Gordon seem to be responsible parents when it comes to taking care of their sons. They are captured in different places hanging out with the duplets.

Here is a picture of the former couple strolling out with their babies. 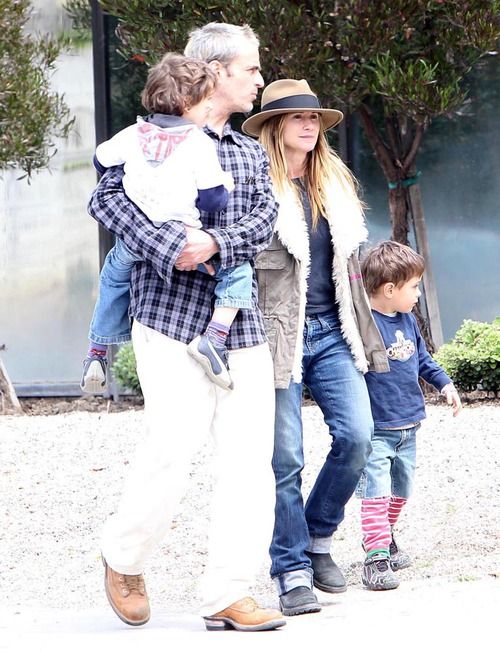 Holly and Gordon with their twin's children  Source: Pinterest

Holly Hunter' Past Affairs and Relationships

Holly Hunter was linked with two men before she met Gordon. She was first married to Janusz Kaminski in 1995 who is a cinematographer and a film director. It seems they met each other during their shooting.

Later on, she revealed that she was not happy with him and therefore got divorced in 2001. Moreover, the reason for their separation is not addressed by either of the former couples.

Holly Hunter dated Arliss Howard in 1998 for one short year, and they parted ways in 1999. The reason for their separation isn't made public by Holly or Janusz.

Let's forget about all of her past relationships; she is now more than just happy with Gordon Macdonald and her twin kids. So far we hear no rumor of their divorce or dispute.

For more updates stay with us: famousstardom.com.