FamousStardom https://famousstardom.com/
Home Gossip Maya Moore hits back at boyfriend rumors as she says she is too busy to focus on her dating gossips Becoming one of the highest-paid athletes in the States is not achieved lightly. And Maya Moore definitely didn’t just stumble in her way to greatness. She has sacrificed and compromised many aspects of her life to be in the position she is today. Her hard work and dedication towards her career in WNBA (Women's National Basketball Association) are commendable.

27-year-old Maya Moore is a hyped name in the WNBA courts. But Maya has been known to make news only for her profession, and skills depicted within the courts. We hardly know what goes on with our favorite WNBA star outside the courts. And recently, when she was asked by a journalist to comment on her dating gossips, she retorted that she is too busy with her career to focus on dating and boyfriend rumors.

MAYA IS TOO BUSY TO BE IN THE DATING POOL

Greatness in one’s field of profession is not something everyone is able to achieve. One needs to be substantially invested in their respective fields to be able to make a name and stand out. Maya is very busy with her training and games. She hardly finds time to be indulged in relationships right now. With more than 10 league titles in total, Maya has focused all her energy on her games. 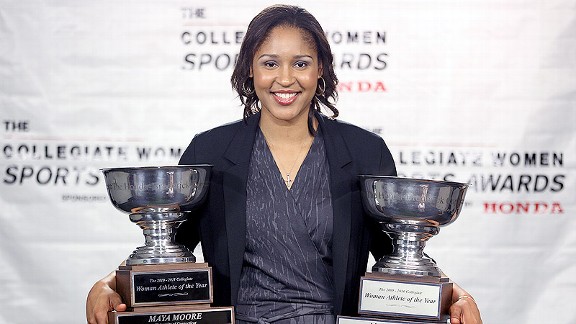 Her love and passion for the game can be seen in her dedication and reverence towards the sports. For almost a decade now, Maya has been playing for various teams and securing numerous awards. Currently, she is the forward for the Minnesota Lynx of the Women's National Basketball Association (WNBA). She is widely known for her ability to steal. Her agility is said to be such that she can move her hands faster than the striking speed of a rattlesnake

And all this has been acquired by participation in various leagues and games and more than, that hours and hours of training.

So when is this professionally hyper-busy girl supposed to have time for looking for guys and going on dates, right?

Like the majority of celebrities, Maya has been in the news a few times with some unexpected (and some expected) rumors. WNBA is famous for encouraging the LGBTQ community. Many players of WNBA are also open about their sexual orientation. So it was only natural that the most loved player of WNBA was going to be surrounded by the same issue someday soon.

Maya was rumored to be gay when two of her teammates, Amber Harris and Jessica Adair, proclaimed their sexuality to the public before the end of 2012. However, the two times Olympic gold medalist Maya has never publicly announced her orientation.

In 2015, Maya Moore was rumored to be secretly married. And she was further accused of hiding the identity of her husband from her fans. It was then when Maya decided to speak up about the “non-sense and ridiculous” gossip.

Maybe she couldn’t handle the fact that she was wrongly being accused of being ungrateful towards her fans by not sharing with them.